Batman: Soul of the Dragon 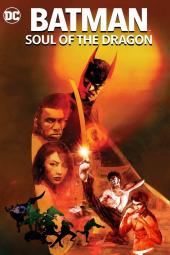 Bruce Wayne (voiced by David Giuntoli) has retired his famous Batman cape and mask and is focusing on his family business and charity work. But then he gets a visit from an old acquaintance, Richard Dragon (voiced by Mark Dacascos), who also completed his martial arts training under their Master O-Sensei (voiced by James Hong). Richard asks Bruce for help: Jeffrey Burr (voiced by Josh Keaton), leader of the mystical Kobra Cult, has taken possession of a mystical gate – the only barrier between the earthly world and the evil demon god, Naga. The gate can only be opened with a special sword, the ‘Soul Breaker’, which O-Sensei gave to Shiva (voiced by Kelly Hu), one of his other students, to safeguard. Bruce agrees to put his Batman cape back on. Just as they get to Shiva to warn her, Burr’s cultists attack and manage to steal Soul Breaker. Knowing that they are stronger together than apart, Richard, Bruce and Shiva recruit the last remaining member of their training squad, Ben Turner (voiced by Michael Jai White). Ben helps them to locate Burr at a secret island, but the four heroes must hurry as Burr prepares to open the gate and become Naga’s avatar to take over the world.

There is a lot of strong and graphic animated violence in this movie, including:

Batman: Soul of the Dragon is the latest animated superhero film of the DC Universe Animated Original Movies line. It can be watched as a stand-alone movie with no deep knowledge of the characters or their backgrounds necessary (note: the movie has a cliff-hanger ending). Batman, even though dominantly featured in the title, actually takes a bit of a backseat, the focus is evenly shared with his fellow heroes: Shiva, Ben Turner, and Richard Dragon. The animation style is ‘old school’ and an homage to 70s martial arts film and superhero comics, and there is a good amount of sarcastic humour. The film is likely to entertain a mature, older teenager and adult audience. However, due to strong graphic violence and mature themes it is unsuitable for children under 15 and parental guidance is recommended to 17.

The main messages from this movie are that you are stronger together than apart, and that you can change and decide your destiny.