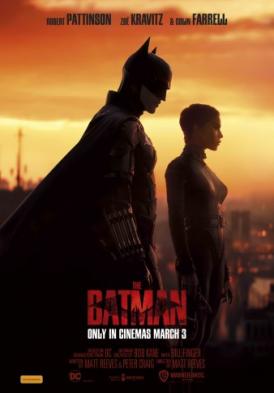 In an effort to continue his murdered parents’ legacy, Bruce Wayne (Robert Pattinson) hides in the shadows of Gotham under the guise of Batman, protecting the innocent and attempting to curb the steadily increasing crime and corruption plaguing the entire city. On Halloween night the Mayor (Rupert Penry-Jones) is brutally murdered and a message is left with the body for ‘The Batman’. Risking his reputation with other officers, Police Lieutenant James Gordon (Jeffrey Wright) invites Batman onto the scene to get his perspective on the case and to show him the message which was little more than a cipher that lead to another clue and ultimately another murder. ‘The Riddler’, as the serial killer is come to be called, wants to stop the lies they have all been told; consequently, he begins attacking the most powerful and corrupt members of society, invoking fear and horror wherever he strikes. Following a lead, Batman tries to track down a girl pictured with the murdered mayor, who, unfortunately, disappears before he is able to find her. Her friend, Selina (Zoe Kravitz), is distraught by her friend’s obvious abduction and is determined to track her down. Working alongside Batman, Selina helps him infiltrate an infamous mobster nightclub but in the process they both learn more than they bargained for. Meanwhile, The Riddler (Paul Dano) begins to target the entire city, killing indiscriminately in ways that no one saw coming. Horrified that The Riddler used him as inspiration and disturbed by the information he learned about his family, Batman goes to heroic lengths to prove his worth not only to a city that mistrusts and reviles him but also to himself and to the little boy who was once powerless and unable to save his parents.

Crime; Corruption; Serial killing; Death of a parent or parents; Drug abuse; Murder; Violence as a means to solve conflict; The dangerous power of social media.

The Batman is an action adventure based on the comic strip superhero. The film is long and dark but the characters are well developed and the plot contains numerous twist and turns. Due to the themes, language and violence this is not a family film but one that will be best enjoyed by older teen and adult audiences.

The main messages from this movie are that revenge will not change the past but surviving can transform people if they simply allow it to. Surviving means finding, within yourself, the power to endure and the strength to carry on.