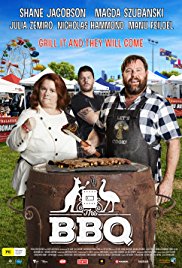 Not recommended under 8, parental guidance recommended 8-10 due to violence, themes and coarse language.

Darren ‘Dazza’ Cook (Shane Jacobson) is a husband, father and barbeque salesman. He is passionate about his regular Saturday barbeque even though it really annoys his wife and is putting some strain on his marriage. Dazza firmly believes that he is a direct descendant of Captain James Cook and, in homage to his ancestor, still uses an antique barbeque which he claims belonged to Cook.

After an unfortunate food poisoning incident, things start to go wrong for Dazza. Luckily he is given the opportunity to redeem himself by competing in an annual steak cooking competition, aided by an exiled Scottish chef ‘The Butcher’ (Magda Szubanski).

Younger children in this age group may also be worried by the above-mentioned scenes.

There are some coarse language and racial slurs in this movie, including:

The BBQ is a mildly entertaining Australian comedy about a seemingly ‘ordinary’ white, middle class man and family - the quintessential Aussie battler. The film does gloss over white colonial history in Australia and glorifies the role of Captain James Cook. A clumsy attempt to acknowledge the controversial nature of this theme (Dazza has an Aboriginal friend at his barbeque, to whom he states “I know Captain Cook isn’t the most popular with some people”, and “my backyard is your backyard”) may be offensive to some viewers. There are also many clichéd racial and gender stereotypes which some parents may wish to discuss with their children. The film is not recommended for children under 8 and parental guidance is recommended for 8 to 10 year-olds

The main messages from this movie are about  triumph through adversity and learning from your mistakes.