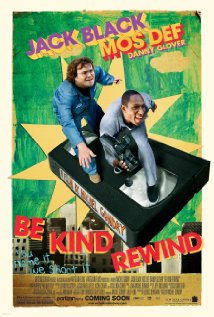 Not recommended under 12, PG to 14 (Sexual references, Coarse language)

Mike (Mos Def) is the sole employee of the Be Kind Rewind video hire shop, owned by Mr. Fletcher (Danny Glover) who refuses to bow down to changing times and change his stock from VHS to DVD format. He has a few loyal customers like Mrs. Falewicz (Mia Farrow). The shop has been condemned and is due to be demolished in six weeks unless Mr. Fletcher can come up with $60,000 for repairs.

Mike’s best friend is Jerry (Jack Black), who is somewhat accident-prone and lives in a caravan next to an electricity power plant. Jerry is continuously concerned that the Government is using the power station to send out brain controlling microwaves.

While Mr. Fletcher is away Mike is placed in charge of the shop. Jerry decides it is time to sabotage the power plant, but things do not go as planned and he becomes magnetised as a result of being electrocuted. The next day when Jerry walks into Mr. Fletcher’s shop, he inadvertently erases all of the videotapes in the store.

When Mrs Falewicz wants to hire the now unavailable video of Ghost Busters, Mike and Jerry decide to remake the film themselves and entice Alma (Melonie Diaz) a girl from the local dry cleaners’ shop to act as their co-star. Their version is such a hit in the neighbourhood that they set out to make more films and more money for the shop, until they are stopped by copyright lawyer Ms. Lawson (Sigourney Weaver).

Be Kind Rewind contains occasional comedy violence and accidental harm. Mike and Jerry’s films also contain some recreated film violence but this is very obviously staged and comic when compared to the original film versions. Examples of violence include:

Children in this age group are likely to be disturbed by the above-mentioned scenes of violence and accidental harm, but there are no additional scary scenes

Children in this age group are likely to be disturbed by the above-mentioned scenes of violence and accidental harm, but there are no additional scary scenes

Younger children in this age group may also be disturbed by some of the above-mentioned scenes of violence and accidental harm.

Be Kind Rewind contains a number of sexual references. Examples include:

There is occasional low level substances use in this movie, including:

Be Kind Rewind contains some coarse language and put downs, including:

Be Kind Rewind targeted at adolescents and adult viewers is an uplifting and good-natured comedy with lots of genuine laughs.