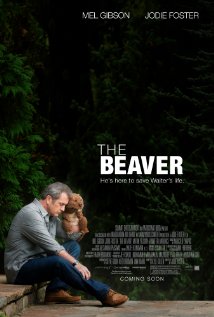 Not recommended under 15 (violence; Disturbing scenes and themes)

The Beaver is an unusual and intense film about Walter Black (Mel Gibson), a successful business executive and father of two, who is struggling to live with a debilitating mental illness.  Walter’s wife Meredith (Jodie Foster) becomes fed up with Walter’s continued disengagement from her and their two children, Porter (Anton Yelchin) and Henry (Riley Stewart).  She asks Walter to move out of the family home.  Alone and desperately depressed Walter hits rock bottom attempting to end his misery by taking his own life.
Walter’s turning point comes when he stumbles upon a beaver hand puppet in a rubbish bin and finds that he can better relate to, and communicate with, those he loves while using the puppet’s persona.

Walter’s life seems to be almost miraculously cured with the beaver as his life support. However when Walter tries to separate himself from the beaver puppet and find his own voice, things become complicated.

Children in this age group may also be confused and disturbed by the relationship between Walter and the puppet, and also scenes of family distress, including

There is some product placement in this movie including;

The Beaver is an intense exploration of one man’s struggle to deal with his severe mental illness and the consequent affect it has on his family. Despite the animal title, the presence of a puppet and child actors in the cast, it is definitely not a film for children or younger teens

Parents of older adolescents may wish to discuss what the film shows about mental illness, its management and its impact on family functioning/ parent child relationships/ marital relationships