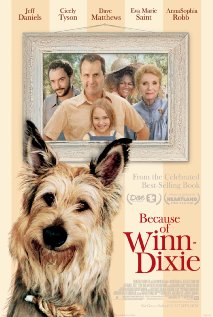 Not recommended under 8, PG to 13 (Scary stuff. Themes)

The inhabitants of the small, impoverished town of Naomi have lost their joy for life and their sense of community spirit. Things look pretty bleak to Opal (AnnaSophia Robb), the vibrant and lonely Preacher’s daughter who, with her father, (Dave Matthews) has just moved to town. While her father attempts to come to terms with the fact that his wife has left him, and that he must preach his sermons at the back of a convenience store, Opal wants nothing more that to have some friends, but no one seems to want to be her friend.

She meets Winn-Dixie, a homeless dog with an almost human personality and an uncanny knack for charming people. Soon Opal is making lots of unusual friends such as the town librarian (Eva Marie Saint) and the local “witch” Gloria Dump (Cecily Tyson). Haunted by a desire to know something about a mother she can’t remember, Opal learns a lot about letting go and giving people a second chance. With the help of Winn-Dixie she teaches the town the value of friendship and helps bring the community together one member at a time.

Loss of a parent, isolation

The film contains a small amount of violence:

There were a few scenes that could possibly frighten young viewers:

The above mentioned scenes could concern some children between the ages of eight to thirteen.

It is unlikely that children over 13 will be frightened by any scenes in this film.

The product Kraft Macaroni and Cheese is referred to and shown many times. It is Opal’s belief that it was this product that helped bring her and Winn-Dixie together.

While there was no use of substances, there were a number of references made to them:

There was some mild coarse language and name calling, including:

The movie’s message is that life can be simultaneously sad and sweet and that everyone needs friends no matter who they are. The movie could provide parents with the opportunity to discuss with their children the importance of friends, including how to choose them, how to make them and how to keep them.