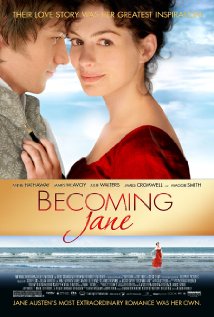 Jane Austen (Anne Hathaway) is a spirited young woman living in Hampshire in the early 1800s. Her father (James Cromwell) is the local vicar with a meagre income, and consequently Jane, her parents, 3 brothers and sister constantly struggle to maintain their middle class existence. Jane’s sister Cassandra (Anna Maxwell Martin) has recently become engaged, providing both joy and a sense of relief for the family. Jane herself feels constant pressure to also alleviate the family’s financial pressures by making a good marriage to wealthy man.
Jane has other ideas though. She wishes to pursue to her dreams to be a writer, much to the distress of her mother (Brenda Blethyn), and thoughts of marriage are few and far between. She wishes to marry for love, not money, and her father is supportive of her on this matter. Jane receives a very suitable proposal from the Lady Gresham’s (Maggie Smith)  nephew, Mr Wisley (Laurence Fox) with whom she is not in love. While contemplating this offer, Jane meets the worldy and penny-poor Tom Lefroy (James McEvoy). A law student, Tom has been sent to Hampshire by his benefactor uncle (Ian Richardson) as punishment for unruly behaviour in London.
Jane and Tom initially clash, with Tom thinking Jane needs more experience before she can be a writer. However, over the course of his time in Hampshire, the couple fall in love. Standing in the way of their hope to be together are the strong objections of both their families, as neither Jane nor Tom have any financial standing. The couple are forced to decide whether to choose love over the practical issues of money.

Apart from the violence mentioned above, it is unlikely that anything in this film will scare children in this age group.

It is unlikely that anything in this film will scare children in this age group.

Becoming Jane is a. is a romantic film based around the life, and possible love experiences, of the author Jane Austen. Young children may find the themes and dialogue of this movie uninteresting and hard to follow. However, adolescents, particularly girls, and adults will enjoy the attractive protagonists, production quality and setting of this movie.