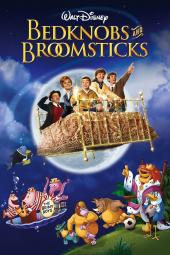 Not suitable under 6; parental guidance to 10 (scary scenes, adult themes)

Bedknobs and Broomstick is a classic Disney film, released in 1971. It is based on two novels by Mary Norton The Magic Bedknob; or, How to Become a Witch in Ten Easy Lessons (1943) and Bonfires and Broomsticks (1947). The story is set in England during the Second World War and the main character is Ms Eglantine Price (Angela Lansbury), an apprentice witch who is busy finishing her correspondence course in witchcraft. Much to her annoyance, Eglantine reluctantly agrees to temporarily take in three children, Charlie (Ian Weighill), Carrie (Cindy O'Callaghan), and Paul (Roy Snart), who have been evacuated from London. The children are equally unimpressed with the arrangement and decide that they’d better run away back to London. However, before they make their escape they see Eglantine riding (clumsily) on a broom stick and decide that maybe it would be more interesting to stick around! Eglantine bribes the children to keep her secret by offering up a magic transportation spell. She places an enchantment onto the brass knob of an old Victorian bed and all the children must do is hop on and they can fly anywhere, riding on the big bed. Eglantine is eagerly awaiting the final spell- "Substitutiary Locomotion" from her course to arrive, in the hopes she will be able to use it to help in the British war effort. Instead she receives a letter notifying her that the college of witchcraft has closed and there will be no more spells. Together with the children, she flies on the bed to London to discover what has happened and to track down the final spell that she needs. Much to her horror and disgust, the professor of her course, Emelius Browne (David Tomlinson), turns out to be merely a showman and a conman who has been sending her spells from an old book that he found on Portobello Road Market. The very spell she is looking for is missing. Together with Mr. Brown and the three children, the group embark on a wild adventure, flying on the bed to faraway islands and underwater worlds trying to piece together everything required for the final spell. Finally, they arrive back in the English countryside which is on the brink of a Nazi invasion. Quickly they must figure out the spell in time to protect themselves.

There is some very mild nudity and sexual innuendo in this movie, including:

There is some mild coarse language in this movie, as well as some phrases that are racist and sexist including:

Bedknobs and Broomsticks is a classic Disney film that is very similar in style to Mary Poppins. An entertaining mix of music, dance sequences and animation that is mild enough for most children to enjoy, however it is very long and will not hold the attention of younger viewers easily. In addition, the themes of War and invading Nazi soldiers may need a bit of historical context added for children to understand.

The main messages from this movie are that it is worth pursuing your dreams no matter where it takes you and that if you cooperate, you can defeat a common enemy.