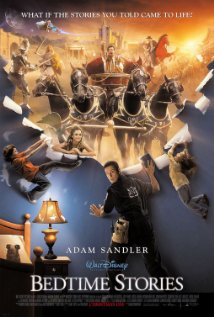 Marty Bronson (Jonathan Pryce) is forced to sell his hotel to Barry Nottingham (Richard Griffiths) a hotel entrepreneur, who promises Marty that his son Skeeter will be the new hotel’s manager when he grows up.

Twenty-five years later Skeeter (Adam Sandler) is working as a maintenance man in one of Barry’s hotels. Skeeter hopes that Barry will make him manager of his new hotel, but when the new manager is announced it turns out to be Skeeter’s nemesis, a man named Kendall (Guy Pearce).

Skeeter’s sister Wendy (Courteney Cox) asks Skeeter to look after her children Patrick (Jonathan Morgan Heit) and Bobbi (Laura Ann Kesling) during the night while she is away. A friend named Jill (Keri Russell) will look after the children during the day. When Skeeter puts the children to bed at night he tells them a bedtime story about a magical land with knights and castles, where the characters in the story are played by the various people in Skeeter’s life including Kendall, who plays the villain of the story. However, partway through Skeeter’s telling of the story Patrick and Bobbi interject their own outlandish additions to the story, one of which involves the king in the story (Barry) giving the underdog of the story (Skeeter) a chance to rule his kingdom in place of Kendall. The following day unexpected events begin to occur, and Skeeter realises that somehow his bedtime stories are coming true.

There are some low level sexual references in this movie, including: