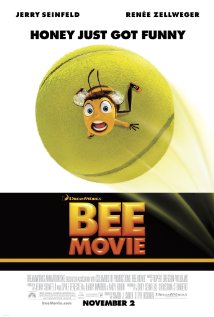 Barry B. Benson (voiced by Jerry Seinfeld) wants to be no ordinary bee. The thought of working himself to death doesn’t appeal to him much and so he goes beyond the bounds of his hive and out into the world where he encounters Vanessa (Renee Zellweger), a florist, who saves him from being swatted by her angry boyfriend, Ken (Patrick Warburton). Barry breaks a cardinal rule of bees and talks to Vanessa and the two become firm friends.

Barry’s life takes on a new dimension however, when he discovers that humans steal bee honey and enslave bees to produce honey for them. He takes his righteous anger to the high court but when he wins his case, Barry is unprepared for the disaster it unleashes.

Children over five are unlikely to be disturbed by anything in this film.

Bee Movie is an animated comedy, which will appeal to older children and adolescents. Values in this movie that parents may wish to reinforce with their children include community spirit and co-operation. Parents could discuss with their children the way that upsetting the balance of nature can have catastrophic results.