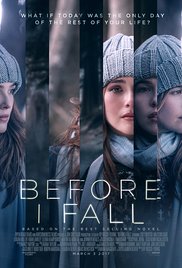 Not recommended under 14, parental guidance recommended 14-15 due to disturbing themes and coarse language.

Before I Fall is a film based on Lauren Oliver’s young adult novel of the same name. It begins as 17-year-old protagonist Samantha Kingston (Zoey Deutch) is killed in a fatal car accident as she and a friend are driving home from a party. When she awakens the following morning with vivid memories of the incident, the high school senior soon begins to realise that she appears to be re-living the last day of her life over and over again. Although initially unsure as to why, Sam comes to understand that she is stuck in the loop until she adjusts her actions and determines what choices she needs to change.

Children in this age group are likely to be disturbed or confused by the plot featuring a girl living a day over and over again after apparently dying.

Before I fall is a film based on a young adult novel that depicts a journey of personal growth and development. Over the course of the movie, as she moves through the five stages of grief, Sam begins to readjust her priorities and discovers that the things she previously valued hold far less significance than she once thought. As a popular high school student from a wealthy family, she initially feels a sense of privileged entitlement above the social misfits in her class. However, this gradually shifts as she goes through a process of acceptance that permanently changes her, and the person she strives to be.

The film’s themes and coarse language make it most suited to older teens. It is not recommended for viewers under 14 and parental guidance is recommended for 14 to 15 year olds.

As well as the film’s main themes, parents may wish to discuss the consequences of bullying and the dangers involved in the risky behaviours shown in the film.