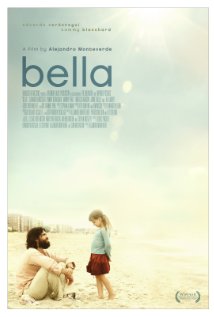 Jose (Eduardo Verastegui) has finally realised his dreams and has just been signed to play professional soccer. As fate would have it, on the very day his new life is set to begin a tragic accident involving the death of a child lands him jail.

In remorse, having served his sentence, Jose no longer allows himself the joy and release that soccer once brought. Instead he works as the head chef in his brother Manny’s (Manny Perez) Mexican restaurant. It is here, surrounded by family and friends, that he finds some solace, though it appears that the memories of the little girl who lost her life are never far from his mind.

While working in the restaurant Jose gets to know Nina (Tammy Blanchard) who works as a waitress until Manny fires her for coming in late. While Manny is concerned about the bottom line of his business, Jose concerns himself with the wellbeing of the people he works with and he risks his job in order to help Nina. Ultimately his simple act of kindness saves one life and changes his own forever.

Bella is a thought-provoking drama which, although tragic in some respects, has an ultimate sense of purpose and redemption.

The main messages from this movie are that in a single moment your life can change forever, and that even apparently insurmountable obstacles placed in your path are there for a purpose and can be overcome.

Parents may also wish to discuss the issues surrounding an unwanted pregnancy which are raised in the film.