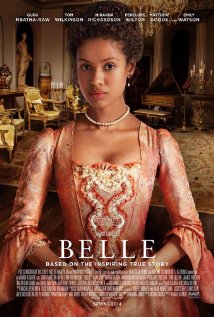 Not recommended under 10, PG to 12 (Themes; Lack of interest for younger children)

Set in the late 18th century, Belle is a romantic drama based on the true story of Dido Elizabeth Belle (Gugu Mbatha-Raw), the illegitimate daughter of a Royal Navy Admiral and a black slave. Belle was the first mixed-race woman to be raised by an aristocrat, making her quite a controversial figure in history. Although her lineage afforded her many privileges, Belle’s race prevented her from fully participating in the society of the time. While in the care of her great uncle Lord Mansfield (Tom Wilkinson), Belle falls for an idealistic and romantic young man, John Davinier (Sam Reid) who is the son of a vicar.  Together they strive to change the way that Lord Mansfield, as Lord Chief Justice, manages the issue of slavery in England.

Belle’s mother dies when she is a child and her father collects her from a relative’s house to take her to lead a ‘better life’ with her uncle. When Belle grows up, she receives a letter telling her that her father has died.

Nothing further of concern

Social drinking of wine and some smoking

The word “negro” is used as an insult.

Belle is a romantic drama that sheds light on a time in history when women were given very little independence and choice, often being pushed to find suitable husbands who would take care of them financially. The film also presents a grim look at racial stereotyping and bigotry and the devastating consequences it may have upon people who are targeted. Belle’s trials and tribulations suggest that marrying for love is of the utmost importance when it comes to happiness and living a contented life.

The story lacks interest for children under 10 and the film’s themes make it is more suitable for teens. It raises a number of discussion points for parents and teenagers, including: