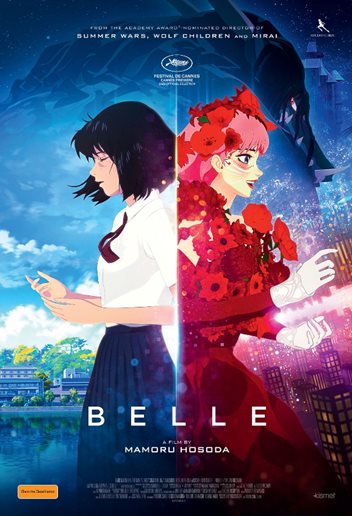 Suzu (Japanese: Kaho Nakamura, English: Kylie McNeill) is a shy, high school student living in a small Japanese village. Ever since her mother died in a tragic accident a few years prior, Suzu has been feeling sad, lonely and disconnected from the world. However, a whole new world of opportunities opens up when Suzu joins the Internet society, “U”, where its five billion users live an alternative reality. Using Suzu’s biometric information – to her shock and surprise – U’s intelligent software creates Suzu’s avatar, Belle, who is stunningly beautiful and gifted with a beautiful voice. Before long, Belle becomes the most famous singer and fashion icon within the digital universe but as she is about to give the biggest concert in U history, a beast-like creature, known as “The Dragon” (Japanese: Takeru Satoh, English: Paul Castro Jr.), shows up and creates havoc. U’s security want to unveil The Dragon’s real-life identity before banning him but, equipped with immense strength, the beast escapes. Belle finds herself scared, but also intrigued and curious, sensing that there is a deeply troubled and hurting soul hiding under the scary exterior.

Belle (2021) is a Japanese animated movie, loosely based on the classic, French fairy tale, Beauty and the Beast. The film is a spectacular firework display for the senses, containing positive and inspiring role models, and important lessons about self-confidence, self-worth, values, friendship, and family. Themes of parental death, grief, emotional abuse, domestic violence, as well as animated violence (fighting scenes), cyberbullying, and scary characters make it unsuitable for a young or sensitive audience, and warrant parental guidance for children aged 9 to 12.

The main messages from this movie are that true beauty comes from the inside; and that we can go over and beyond ourselves if we are fighting for something we truly believe in.

This movie could also give parents the opportunity to discuss with their children the importance of seeking help when you are struggling emotionally. For a long time, Suzu tries to deal with her trauma and grief on her own and rejects help, only to find herself depressed and lonely.