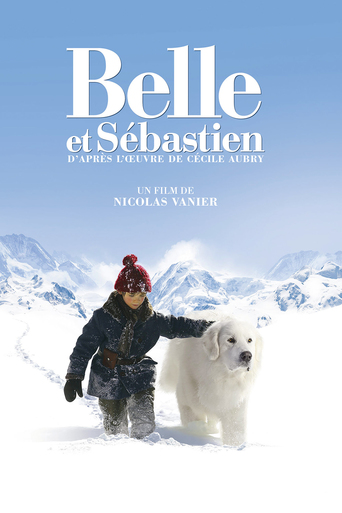 Not recommended under 9, parental guidance 9-13 (Violence; Disturbing scenes; in French with English subtitles)

Sebastian (Felix Bossuet) is a six-year-old boy, who lives with his grandfather Cesar (Tcheky Karyo) and his cousin Angelina (Margaux Chatelier) in a small village in the French Alps near the Swiss-French Border during Germany’s occupation of France in 1943. The film opens with Sebastian and his grandfather roaming through the mountain countryside. When Sebastian and Cesar come across the remains of a savaged sheep we learn that a monstrous wild dog referred to as “The Beast” is believed responsible for the deaths of a number of sheep in the district. The beast is number one on the village’s most wanted list with mobs of villagers continuously trying to hunt-down and kill the sheep-killer.

Sebastian spends most of his days exploring the countryside and comes upon ‘The Beast’.  The animal turns out to be far from the wild dog it is believed to be and the pair becoming firm friends. When Sebastian manages to give the dog a bath in a stream his new friend is transformed into a beautiful white Pyrenean Mountain Dog, who Sebastian promptly names Belle because she is so beautiful.

Sebastian keeps his friendship with Belle a secret and does his best to hide her since, although it is obvious to Sebastian that Belle has been wrongly accused of killing sheep, his grandfather and the rest of the villagers are convinced otherwise.

The loss of sheep to wild dogs is not the only problem the villagers have to face because a small army of Nazi soldiers led by the stone faced Lieutenant Peter (Andreas Pietschmann) arrive in the village. The Nazis are after Jewish refugees who have been escaping over the mountain passes into Switzerland and suspect the village doctor, Doctor Guillaume (Dimitri Storoge) of assisting the refugees to escape across the mountain into Switzerland.

When one night, Doctor Guillaume is unable to lead a group of refugees across the mountain, it falls to Sebastian, Angelina and Belle to undertake the perilous mission.

The film contains violence against animals and people including the depiction of blood, threats of violence and war related themes. Examples include:

Children in this group may also be disturbed by some of the above-mentioned scenes and also:

The film contains one or two low-level coarse words and name calling. Examples include:

Belle and Sebastian is French film based on a children’s book by Cecile Aubry. It is a heartwarming adventure with attractive main characters – an appealing young boy and beautiful dog - that will appeal to both older children and adults. The film also contains some breathtaking scenery. There are a number of violent, scary and disturbing scenes, so the film is not recommended for under 9s, with parental guidance recommended for 9-13 year olds. The film is in French with English subtitles, so would be difficult for children who are not reading well to follow.