Belle and Sebastian: Friends for life 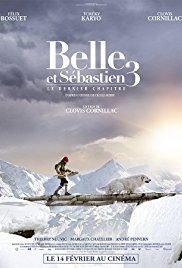 Not recommended under 11, parental guidance recommended 11-13 due to violence and disturbing scenes. In French with English subtitles.

The third and final instalment in the French series Belle and Sebastian, sees 12-year old Sebastian (Félix Bossuet) struggling with a decision by his father Pierre (Thierry Neuvic) and adoptive aunt turned step-mother Angélina (Margaux Chatelier) to move to Canada from their small village in the French Alps.

When a dark and menacing man called Joseph (Clovis Cornillac) arrives claiming ‘rightful’ ownership over Sebastian’s Pyrenean Mountain dog Belle and her new puppies, Sebastian and his adoptive grandfather César (Tchéky Karyo) are forced to do everything in their power to protect them.  Sebastian takes it upon himself to hide Belle and her puppies in the mountains; but when Joseph kidnaps them, Sebastian and César (with the help of some friends) must outwit Joseph and save Belle.

There iare scary scenes of violence in this movie including:

Children in this age group may be scared by the threats of violence made against Sebastian and others.

Belle and Sebastian: Friends for life is the third instalment in the Belle and Sebastian story, based on the 1965 French novel by Cécile Aubry.  Like the two previous films, it presents an exciting adventure, with stunning cinematography and wonderful performances by human and canine cast alike.  The English subtitles and frequent frightening scenes will limit the film’s appeal to, and suitability for, under 13s, but teenagers and adults are likely to enjoy the sweet, well-paced final chapter in this series, which provides a European charm and precision.

The main messages from this movie are the importance of standing up to bullies and of fighting against inequality.