Belle and Sebastian: The adventure continues 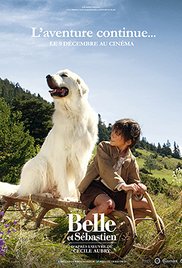 This is a sequel to the 2013 movie, Belle and Sebastian, set in a picturesque village nestled in the French Alps. Nine-year-old orphan Sebastian (Felix Bossuet) is living happily with his adopted grandfather Cesar (Tcheky Karyo) and his best friend Belle, a large white Pyrenean Mountain Dog. It is 1945 and Sebastian's cousin Angelina (Margaux Chatelier) is due to return from fighting for the French Resistance. Tragically, Angelina's plane crashes into a forest on the border of Italy, causing a large forest fire, and Angelina is presumed to be dead.

Cesar refuses to believe that Angelina is dead and decides to hire a pilot to fly over the forest, searching for signs of survival. The only pilot available is a rogue called Pierre (Thierry Neuvic) who Cesar knows is Sebastian's father. Although Cesar is reluctant to hire Pierre, he knows it is his only hope.  Cesar tells Sebastian that Pierre is his father, but together they decide to keep it a secret.

When Pierre agrees to fly over the forest in search of Angelina, Sebastian and Belle hide on board the plane. When resulting events cause them to makes a crash-landing by a lake near the forest, Sebastian, Belle and Pierre are stranded and decide to search for Angelina on foot. Braving the forest fire, they set off on a perilous adventure during which many new relationships are forged.

In addition to the above-mentioned violent scenes, there are some scenes that could scare or disturb children under the age of five, including the following:

In addition to the above-mentioned violent scenes and scary visual images, there are some scenes in this movie that could scare or disturb children aged five to eight, particularly those who can read the subtitles or speak French, including the following:

Children in this age group are unlikely to be disturbed by this film, although it is an emotional film for both children and adults

There are some mild references in this movie, including:

Belle and Sebastian: The adventure continues is an entertaining, moving and well-made family drama. There are plenty of adventure and excitement to engage older children and the themes are complex and can be related to modern life.  Due to emotional themes and scary scenes, this film is not recommended for children under 9 and parental guidance is recommended for 9-13 year olds. Because the film is in French with English subtitles, it would be difficult for non-French speakers with limited reading skills to understand.

The main messages from this movie are that with great determination and the courage to take risks, you can be a hero.