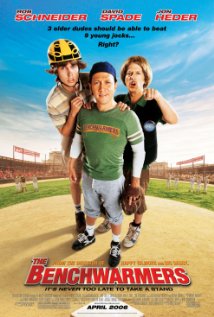 Not suitable under 8; parental guidance to 13 (violence, sexual references, language)

Clarke (Jon Heder) and Richie (David Spade) are adults who never got to play sport as kids. They were considered ‘losers’ or ‘nerds’ and so were both bullied and left out of the local team games. Gus (Rob Schneider) is the local landscaper who used to play baseball as a kid. After Gus and Clarke rescue three kids who are being bullied by the elementary league team, Gus is surprised to find that Clarke has never hit a baseball. As a result he takes Clarke and his friend Richie down for a hit. When the same local team tries to get the three of them off the local pitch, Gus challenges them to a game. Whoever wins gets to stay. The three men win the game and so starts a idea for a round robin challenge. Three men against the various elementary league teams and along the way they become an inspiration for children who are currently excluded from local teams for the same reasons that Clark and Richie were when then were back in school.

There is some violence in this movie, mostly intended for comic effect, including:

Parents are reminded that preschoolers will not understand the intent of comic violence and could be confused by it. Although comic violence may appear benign for older children, and children often enjoy it, over-exposure to comic violence can lead children to believe that violence doesn’t really hurt.

Children in this age category may also be disturbed by the scenes mentioned above.

In addition to the above mentioned violent scenes, there are some scenes in this movie that could scare or disturb children aged eight to thirteen, particularly the scenes where children are being bullied and the players are being hit and not getting up.

It is unlikely that children over the age of thirteen will be disturbed by anything in this film.

One scene in which an adult posing as a young player in one of the games becomes completely drunk (on beer and tequila). He throws the ball wildly then ‘throws up’ in the coach’s face.

The Benchwarmers is essentially a comedy with some serious moments, and an underlying theme that bullying in sport is unpleasant and unnecessary. The movie is reasonably entertaining, quite funny in places, and although parts are overly sentimental, many adults and older adolescents will enjoy it.

This movie could give parents the opportunity to discuss the issue of bullying.