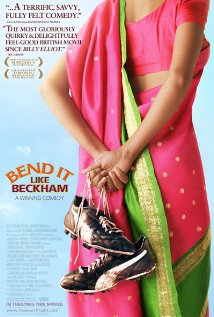 “No-one can bend a ball like Beckham” is the catch phrase of Jess (Jessminder) an Indian teenager brought up in England who loves playing football with her mates. Her idol is Beckham and she dreams of playing with him and kicking the winning goal. However, her parents have very traditional Indian beliefs and a girl playing football is not part of them. Jess’s parents forbid her to play the game but she disobeys them and continues to play anyway. She is very good at the game and is noticed by a girl, Jules, who is a member of the local girls’ football team, the Hounslow Harriers. Jules encourages her to try out for the team.

The coach, Joe, takes a liking to Jess and, impressed by her obvious skills, gives Jess a position in the team. This requires lying to her parents about what she is doing—she pretends she has a part time job, and sneaks out when they are not around. Jess isn’t comfortable doing this but her love for playing football overrides this and her friends encourage her to go against her parents' wishes and break the rules.

The story continues as Jess’s football team travels to Germany for a game and reaches the finals. The story is intertwined with that of her older sister, Pinky, who is engaged to be married to an Indian boy and whose relationship is directly affected by Jess’ s behaviour. The engagement is cancelled by the boy’s family because of what they deem to be inappropriate behaviour by Jess, but they are later reunited as the parents relent. The comparison is made between Jess who wants to break the rules and Pinky, who on the surface is following a more conventional lifestyle, but actually is just as rebellious as her sister.

Jess and Jules both fall for Joe which causes a rift between the two friends and which is misinterpreted by Jules’s mother. This also causes further dilemma for Jess as she knows her family won’t accept Joe.

The major problem for Jess comes when the finals of the football are scheduled on the same day as Pinky’s wedding. Jess has to forgo the game out of loyalty to her family. However at half time Jess’s Dad lets her go to play and she wins the match by scoring two goals. Jess and Jules are selected by an American scout who offers them scholarships to attend college in America and play professional football. This, of course will be unacceptable to Jess’s parents but she decides to be honest with them about the offer. Much to her surprise her Dad agrees and Jess goes on to be a top player for England.

There is little in this film that is scary for young children. Some parents may prefer not to expose their very young children to the course language and sexual innuendo in the movie.

There is little in this film that is scary for young children. Some parents may prefer not to expose their very young children to the course language and sexual innuendo in the movie.

Parental guidance is recommended due to the coarse language and sexual references.

The coarse language and sexual references may require some parental guidance for children over twelve.