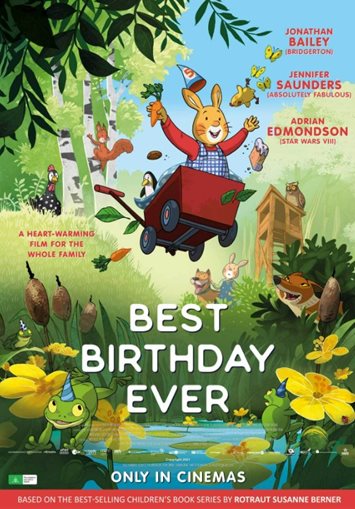 Charlie, (voice of Max Lester) a young rabbit, is very excited about his 5th birthday and can’t wait for a fun day full of surprises. When the day arrives, however, he isn’t expecting the worst surprise of all - his baby sister, Carla, is sick and Mum (Jennifer Saunders) and Dad (Jonathan Bailey) have to take her to the doctor. Charlie has to go next door to his friend Monica’s (Beatrice Davies) house and wait for his birthday to come later. Charlie doesn’t want to be slobbered on by Monica’s dog, Bellow, so he decides to take his toys and some food in a cart to his Grandma’s (Adrian Edmonson). When Monica realises Charlie has gone, she chases after him and joins him on his journey, through the forest to Grandma’s. Things seem to be going well until they enter a part of the forest which is quite scary. It is dark, with eerie sounds, and they are being followed by a fox. Charlie and Monica have a few adventures on their way to Grandma’s which don’t always turn out well.

There is some very mild violence in this movie, including:

Best Birthday Ever is an animated movie based on the book series, Karlchen by Rotraut Susanne Berner. It is a very gentle, slow paced movie that is made for young children. At 75 minutes, it is a good length and suitable for all ages. However, due to the mild threat to the young rabbits, parental guidance is recommended for 4 year olds and under.

The main messages from this movie are the importance of friends; and enjoying the beauty of nature.