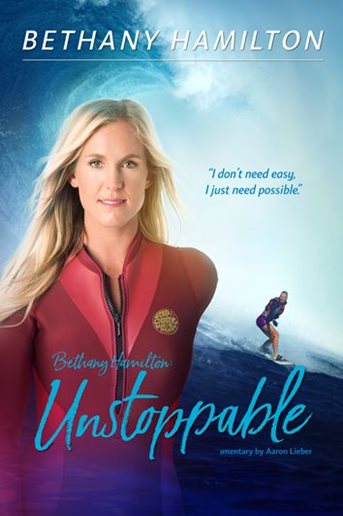 Not suitable under 8; parental guidance to 13 (mature themes and distressing themes related to a shark-attack)

Bethany Hamilton: Unstoppable is a documentary by Aaron Lieber that follows the life of one-armed surfing legend Bethany Hamilton, who lost her arm at age 13 during a shark-attack. Using old interviews, news, and home-footage, interspersed with talking head style interviews with current-day Hamilton, the documentary explores the impact the attack had on her life - not only physically as an athlete, but spiritually and emotionally as a teenager thrown into the media spotlight.

Bethany Hamilton: Unstoppable is an inspirational documentary about surfer Bethany Hamilton and her journey from shark-attack victim to professional surfing legend. This documentary is beautifully shot and provides a glimpse into the adult life of Hamilton. While undeniably inspirational and an example of a strong female role model, this documentary may lack interest for some viewers due to a greater focus on surfing, rather than the story. Likely to appeal to surfing enthusiasts, this film is suitable for children over 13, with parental guidance recommended for ages 8 to 13 due to distressing themes related to the shark-attack.