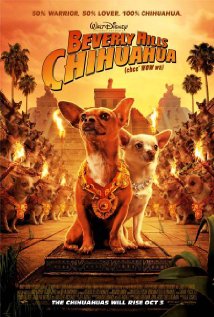 Not recommended under 5, Parental guidance to 10 due to scary scenes.

Chloe (voice of Drew Barrymore) is the pampered lapdog of the very rich Aunt Viv (Jamie-Lee Curtis) who is a senior executive in a cosmetic company.  Each day Chloe is dressed in a diamond collar and a variety of clothes, sent to the dog salon, attends doggy play dates and is generally spoilt. Chloe is being courted by Papi (voice of George Lopez) who belongs to the Mexican gardener Sam Cortez (Manolo Cardona) but she doesn’t think a mere gardener’s dog is good enough for her. Sam is treated as a friend by Aunt Viv who is fond of both him and Papi.
Aunt Viv has no children of her own but does have a niece, Rachel (Piper Perabo), who doesn’t work but instead spends time shopping and partying with her friends. Rachel and Chloe detest each other. However, when Aunt Viv has to go overseas her usual dog nanny is not available and she asks Rachel to babysit Chloe.
Rachel’s friends book a weekend in Mexico and she decides to go, taking Chloe with her. Chloe escapes and is subsequently “dognapped” into the world of dogfighting. Rachel stays behind to find her, while her friends return to Beverley Hills. Sam finds out that Chloe has been dognapped and he and Papi go to Mexico City to rescue her. Sam and Rachel meet up unexpectedly at the police station and together they begin the hunt for Chloe.

In the meantime Chloe is having an adventure of her own. Assisted by a German Shepherd named Delgado (voice of Andy Garcia) she escapes from the vicious Diablo (Edward James Olmos), the fighting dog who is guarding her, and begins the dangerous journey home. Along the way she learns the value of good friends and also learns a lot about herself.

Some children in this age group may also be disturbed by the scenes of animals in danger.

Beverly Hills Chihuahua is a comedy adventure film. The main messages from this movie are that

Parents may also wish to discuss the affluent lifestyle of Chloe and Auntie Viv. The film shows that material possessions are not everything and that it is her wealth that leads to problems for Chloe.