Beyonce: Life Is But A Dream 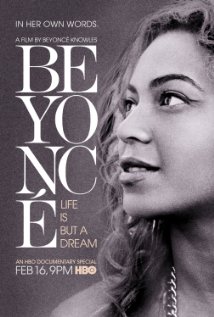 Not recommended for children under 13, due to some coarse language and mature themes

Beyonce: Life Is But A Dream is an autobiographical film, directed and produced by  well known Beyonce Knowles. The film depicts Beyonce in each of the dynamic roles she fulfils within her life: musician, actress, entrepreneur, as well as a wife and mother. It incorporates extensive first-person footage from professional interviews together with Beyonce speaking directly to her webcam, where she exposes intimate details about her thoughts and feelings to viewers. She reflects on a range of issues including: what it means to live in the public eye as a celebrity; the state of her relationship with her father and their eventual estrangement; her desire to be a mother and the loss she feels after her miscarriage; and her passion for her artistic craft. The documentary also highlights the intense psychological and physical demands of her live performances, and the amount of preparation that goes into running the business that is Beyonce’s music career.

There is no violence of concern in this movie

There is some coarse language in this movie, including multiple uses of ‘fuck’. Also used are shit, bullshit, pissed off, bitch and mother fucker.

Beyonce: Life Is But A Dream is an inspirational film that demonstrates how passion and determination can help you overcome obstacles in life. Best suited to those over 13 years (for themes and coarse language).  Beyonce’s musings offers audiences many insights into the things that her experiences have taught her. In discussing her career, she offers advice to girls and women about needing to fight harder to obtain the level of gender equality that they deserve. When reflecting on her miscarriage, she details the gravity of the pain she felt, but also explains she wouldn’t be the person she is without having experienced it. The film ultimately acts as a voice for a strong-willed, successful woman who has lived through far more than most people during her 31 years, and as a result, has learned an incredible amount about life.