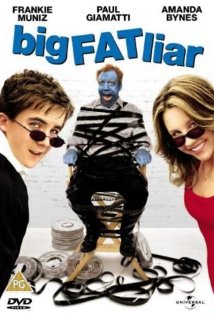 Jason Shepherd is an over confident fourteen year old and a compulsive liar. He makes up fantastic stories in order to get himself out of trouble with his parents and teacher. He is given a deadline to hand up a 1000 word assignment or face summer school. His father says this should be no problem for him as he is so good at creating stories. After much deliberation, Jason writes ‘Big Fat Liar’ but while delivering it to school on his sister’s bike (because his skateboard had previously been taken by the school bullies) he is knocked over by a limo. He convinces the owner of the limo to drive him to school as his bike is now wrecked. The owner turns out to be Marty Wolf, a big Hollywood movie director with an over-inflated ego and a bigger liar than Jason. Jason inadvertently leaves his assignment in the limo and ends up having to go to summer school.

One day, to relieve the boredom, he takes his friend Kaylee to the movies where he sees a preview of a new movie entitled Big Fat Liar. Jason recognises this as his own work and sets out with Kaylee to Hollywood to confront Marty Wolf. Jason wants Marty to acknowledge that Big Fat Liar is his creation but of course Marty won’t admit to it. What ensues is a funny, if far fetched, plot by Jason to make Marty admit the truth. Jason’s tactics are more of a mind game designed to frustrate and embarrass Marty and sabotage his career. Along the way he gains many supporters in people that Marty has humiliated and cast off as the “nastiest director in Hollywood”. Jason also learns that the “truth is not overrated”.

There is little violence in this film but there are a few scenes which could cause concern such as:

There is also cartoon type violence, set in a comic context, when Marty is being hounded by Jason such as:

Also Marty dishes out verbal abuse to everyone with whom he comes into contact.

There is really nothing scary in this film. The only scene that could possibly disturb some children is a scene at the end in which Jason and Marty are in their final confrontation on the top of a tall building. When Marty is defeated, Jason decides to copy a stunt he had previously watched, and jumps off the top of the building. For a moment there, Jason is shown falling through the air but he lands safely on a huge rubber mat. He apparently does it just for the thrill.

Other than the above-mentioned scenes there is nothing that would disturb children under 5.

Other than the above-mentioned scenes there is nothing that would disturb children under 8.

The movie has very little of any of these elements.

There is very little coarse language.

The take home message from this movie is that ‘the truth is not overrated’. It is also that the Davids can defeat the Goliaths if they use their wits and cunning rather than rely on physical strength.

Some values that parents may wish to encourage include:

Some values that parents may wish to discourage include: