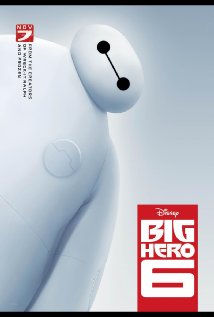 This animated film is set in the futuristic city of San Fransokyo.  The film’s lead character Hiro Hamada (voice of Ryan Potter) is a teenage technology genius who has a passion for illegal back alley “Bot” fights in which small robots fight each other until one is destroyed.

In an attempt to turn Hiro’s intellect to more constructive ventures, his older brother Tadashi (Daniel Henney), takes him to the San Fransokyo Institute of Technology where Tadashi is a student. At the institute Tadashi introduces Hiro to several of his nerd friends including Go Go (Jamie Chung), Wasabi (Damon Wayans Jr.) Honey Lemon (Genesis Rodriguez) and Fred (T.J. Miller) all of whom have created unique and ingenious inventions.  Tadashi also introduces Hiro to his own unique invention, an inflatable robotic medic named Baymax (Scott Adsit). Hiro is so impressed with what he sees at the institute that he decides he must become a student himself, but the only way Hiro can be accepted into the institute is by impressing the head professor Robert Callaghan (James Cromwell) via the annual robotics exhibition.

Hiro designs and builds thousands of “micro-bots” controlled via a neural transmitter worn as a headband, and able to be transformed into anything that the wearer can imagine. At the exhibition the micro-bots impress Callaghan so much that Hiro is accepted as a student but his happiness is short lived.  A fire breaks out, the exhibition hall erupts in flames, and a massive explosion kills Tadashi and Callaghan.

While recovering from the trauma of Tadashi’s death, Hiro discovers Baymax stored away in his bedroom and, when the robot is accidentally activated, Hiro learns that Tadashi’s death may not have been accidental after all. With the help of Baymax, Go Go, Wasabi, Honey Lemon and Fred, Hiro sets out to uncover the truth behind his brother’s death and the quest leads them into a world of danger and unexpected outcomes.

The film contains intense animated action violence; self-sacrifice resulting in the deaths of main characters, and destruction of robots. Examples include:

Nothing of concern in the movie, but associated merchandise is likely

The film contains some language that might be imitated by children. Examples include:

Big Hero 6 is an animated action adventure targeted at older primary school children and teens. Positive messages relate to siblings supporting and encouraging each other as well as the importance of education and the drive to learn, create and invent. However, the film does contain some intense animated action violence, scary images and themes that are likely to disturb children under eight. It is therefore not recommended for this age group and parental guidance is recommended for the 8-10 age group.

Parents may wish to discuss Hiro’s seeking of revenge for the death of his brother at one stage and the consequences of this type of action.