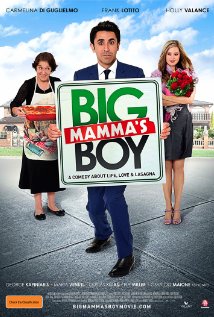 Lacks interest and not recommended under 8, PG to 15 (Coarse language; Sexual references)

Rocco (Frank Lotito) is 35, single, Italian and a self proclaimed Big Mamma’s Boy.  Still living at home with his mother (Carmelina Di Guglielmo), Rocco struggles to have an independent life without Mamma’s interference.  Rocco’s father died some years earlier and since then his mother has depended on him.  The mother-son dynamic is set to change when Rocco meets Katie (Holly Valance) through his job in real estate and falls instantly in love.  Katie finds Rocco’s quirky ways endearing but will not put up with his immaturity and inability to stand up to his mother.

Difficulties emerge as Rocco attempts to move out on his own to prove to Katie that he can live without his mother.  Mamma will not give up her baby without a fight and will do almost anything to keep him at home.  Who will Rocco choose, the love of his life, or his mother?

Minimal use of violence includes:

There are frequent sexual references in this movie, many of them objectifying women. Examples include:

There are coarse language and putdowns in this movie, including:

Big Mamma’s Boy is a is a comedic look at an adult male still living with his mother and the difficulty he has in finding his own independence and having a real relationship.

The main messages from this movie are about balancing family loyalty and one’s own independence.
This movie could also give parents the opportunity to discuss with their children attitudes and behaviours, and their real-life consequences, such as: