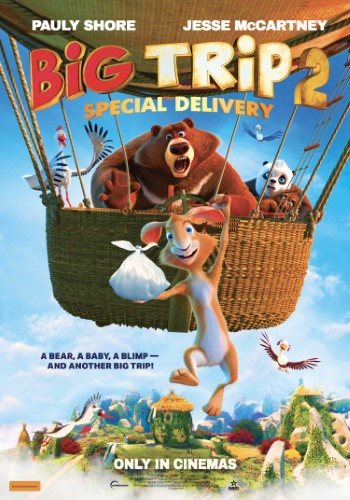 Oscar, the talkative hare (voice of Jesse McCartney), is up to his harebrained antics, much to the disapproval of Mic-Mic, the grumpy bear (voice of Pauly Shore). Then, no sooner had the two been reminiscing about their friend Panda, who had mistakenly been delivered to Mic-Mic’s doorstep as a baby, that Panda turns up to see his old pals. Shortly after, the three discover with shock that another baby has arrived, this time a baby grizzly. When the stork, Carl, delivers the post and sees the grizzly bear cub, he is determined to return the bear to its rightful parents in the hope of redeeming his previous failure of delivering Panda to the wrong home. The grizzly bear cub is intended to be the child of Presidential Candidate, John Grizzly, who is keen for his baby to arrive as he is not eligible to run for Presidency unless he is a parent. However, Don Vulture, who is disliked by the other forest animals, will stop at nothing to prevent the arrival of the baby grizzly, sabotage the election and ensure he remains in his role as undefeated President of the United Woods of America. So, the race is on with Mic-Mic, Oscar and Panda teaming up with Carl and their new-found friend, Michaela, against Don Vulture’s sinister pack of vultures and hyenas.

Separation from a parent; Kidnapping of a baby; Adoption; Election sabotage.

Big Trip 2: Special Delivery is an animated sequel to The Big Trip (2020), though, while references are made to the story of the first film, it is not essential to watch the first prior to Big Trip 2. The movie is action-packed and likely to appeal to many children, however, parents and older children may find the voices annoying, and due to the violence and scary scenes this film is best suited for children aged 8 and over.

The main messages from this movie are to treat people how you would like to be treated; and that it’s often easier to push through the difficult times if you are part of a team that works together and supports each other.