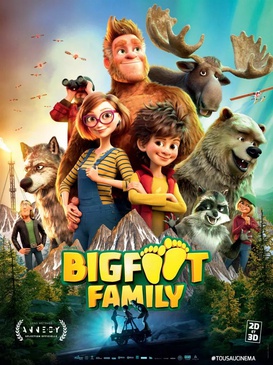 Not suitable under 5; parental guidance to 8 (scary scenes)

Adam (voiced by Jules Wojciechowski), the son of Bigfoot (voiced by Roger Craig Smith) and Shelly (voiced by Lindsey Alena), has big shoes to fill after his father comes out of hiding and becomes a worldwide sensation. To do something meaningful with his fame, Bigfoot travels to Alaska to help protest an oil drilling company, and Adam prepares to lose his father all over again. When Bigfoot goes missing after breaking into the grounds of the oil company, Adam and his mother travel to Alaska to find him. Adam, his mother, and their animal companions, Wilbur the Kodiak bear (voiced by Michael Sorich) and Trapper the raccoon (voiced by Joey Lotsko), must battle armed guards, hungry wolves, and a money-obsessed oil tycoon to find Bigfoot and save the Alaskan valley from destruction.

Bigfoot Family, the sequel to The Son of Bigfoot (2017), is an animated children’s comedy with strong themes of environmental protection and family love. Originally in French, this film was dubbed in English for its Netflix release. This film is likely to entertain children, however, due to scary scenes and jump scares, it is not suitable for children under 5 and parental guidance is recommended to age 8.

The main messages from this movie are that protecting the environment is more important than money; and that one person can make a difference.