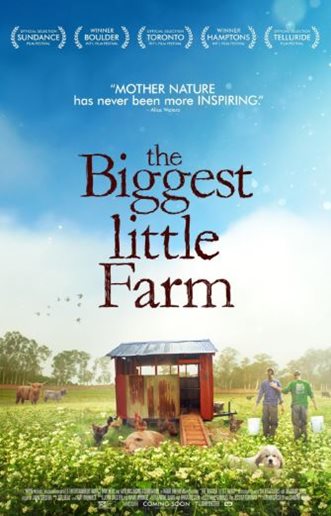 Not suitable under 8; parental guidance to 9 (upsetting images and death of animals)

The Biggest Little Farm is a true story documented by photographer John Chester about his and his wife Molly's journey from apartment living to running an organic/bio-dynamic farm. Molly was a chef who had always dreamed of being able to grow all the food she wanted to cook but finances prevented them from living the dream. Then they adopted Todd, a rescue dog, who never got used to living in an apartment. John and Molly were eventually evicted due to Todd's constant barking and so, aided by some crowd funding, they purchased 200 acres of land in Southern California.

The film documents how, with the help of mixed farming expert Alan York, they transform the barren land into a fully functioning bio-dynamic farm. John and Molly also get a lot of help from volunteers around the world who are interested in mixed farming. As on any farm there are good times and bad times. John and Molly must learn how to cope with coyotes attacking the ducks and chickens, gophers eating the roots of their fruit trees, infestations of snails, blue algae and birds who eat all of their fruit.

The Biggest Little Farm is a beautifully shot documentary about returning to traditional mixed farming methods and learning how to farm in harmony with nature. Spanning a period of ten years, the film shows how nature can work to our advantage if we allow it to. The film shows much sadness in the death of various farm animals, a much loved pet dog and a family friend. Therefore, it is not suitable for children under 8 and parental guidance is recommended for children 8 – 9 years old.

The main messages from this movie are to overcome setbacks and disappointments with perseverance and determination and to learn from nature how to balance the good with the bad.