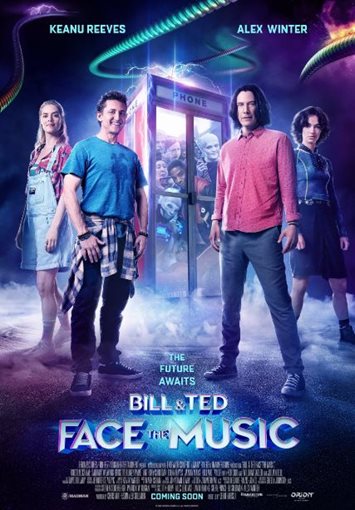 It has been over 20 years since inseparable best buddies, William "Bill" Preston (Sam Winter) and Theodore "Ted" Logan (Keanu Reeves), came back from their time-travelling adventures and celebrated success with their rock band, "Wyld Stallyns". Now middle-aged and professionally unsuccessful, it is beginning to doom on them that not only have they not fulfilled the prophecy of "uniting the world by song", but that their fruitless endeavours have taken a toll on their marriages. However, a messenger from the future – Kelly (Kristen Schaal), daughter of their past time-travelling mentor Rufus – appears with an important message: If they do not write and perform the world's greatest song by 7:17pm that night, time and space will collapse, and reality as we know it will end. Left with just under 2 hours to save the world, Bill and Ted decide to travel to the future, hoping to take the song from their future selves. Of course, things are not as straight-forward as they think, and another excellent time-travelling adventure begins. Only this time, Bill and Ted also have the support of their equally goofy and good-natured daughters, Billie (Brigette Lundy-Paine) and Thea (Samara Weaving), who are determined to help their Dads save reality.

Bill & Ted Face the Music is the sequel to the successful 1989 and 1991 Bill & Ted comedy films Bill & Ted's Excellent Adventure and Bill & Ted's Bogus Journey, again featuring Keanu Reeves and Sam Winter (as well as more of the original cast) as two goofy rock music nerds, though now middle-aged, but still living by their standard of "being excellent to each other", and with the ever-enthusiastic vision to "unite the world by song". Grown-ups who loved the originals, as well as the new generation of young viewers will be equally entertained and delighted by this project, which had been long in the making. Laden with funny dialogues and hilarious characters portrayed by an excellent cast, this movie just zips by. Featured violence, scary characters and themes are mainly of slapstick nature and taken to absurd and over-the-top levels. Therefore, the film is likely to appeal to a family audience with children aged 10 and over, with parental guidance for children from age 7.

The main messages from this movie are that you should be "excellent to each other", that it is never too late to follow your dream, and that persistence, teamwork, and creativity go a long way.

This movie could also give parents the opportunity to discuss with their children the importance of not giving up: on hope; on oneself; on loved ones; and on one's dreams.