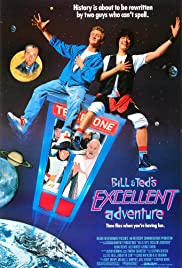 Bill (Alex Winter) and Ted (Keanu Reeves) are going to fail their history class. If Ted fails, his dad (Hal Landon Jr.) is threatening to send him off to Military School in Alaska. They need to do something drastic to make sure they pass. Luckily for them, someone from the future brings them a time machine which means they can go back in time to any era they choose. When Napoleon Bonaparte (Terry Camilleri) accidentally ends up back at their house in the present, they decide he will be a great addition to their history presentation and ask Bill’s little brother (Frazier Bain) to look after him whilst they go back in time to collect other famous historical figures. Bill and Ted begin a harebrained, time-bending adventure which takes them from place to place, including Ancient Greece (Where they pick up Socrates!) and Medieval England. Along the way they get into many hilarious scrapes and mishaps.

Bill & Ted’s Excellent Adventure is a silly time-travel caper which will give older children plenty of laughs. Keanu Reeves and Alex Winter do a fabulous job of bringing the gormless but very likeable characters of Ted and Bill to life. Although there is not a lot to scare young children, there is some coarse language, sexual references, and violent scenes; making this film unsuitable for children under 10.

The main messages from this movie are not to leave your schoolwork to the last moment and that for some people, lived experiences are much more educational than sitting and learning in a classroom.