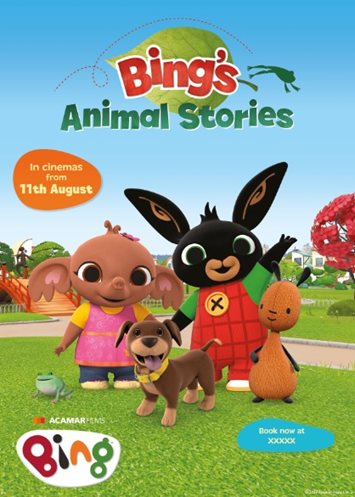 Suitable for all ages but may lack interest for children over 6.

As audiences help Pico complete her special animal sticker book, they join Bing and his ‘carer’, Flop, as the two learn to make friends with and care for a dog. Bing is soon joined by his friends, Amma, Sula and Pando, who help him turn a shed into a playhouse; lean to feed ducks; and create a habitat for a frog. The friends also get to sit in a fire engine; find a mother cat and her newborn baby kittens; as well as learn the art of the squiggle and how to turn a mistake into something beautiful.

Managing disappointment; Animal safety; Turning a negative into a positive.

Bing’s Animal Stories is a series of CGI - animated episodes woven into a movie length feature. The film has vibrant animations and a plot best suited to preschoolers. It will likely lack interest for older children, unless they are ardent fans of Bing, the television series (based on the books by Ted Dewan) around which this film is based.

The main messages from this movie are to be helpful, thoughtful and considerate of others (including animals); and to always look for ways to brighten the lives of those around you.