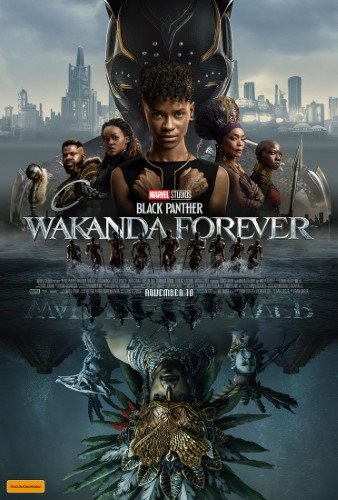 Not suitable under 12; parental guidance to 14 (violence, scary scenes)

The King of Wakanda, T’Challa, has died and Queen Ramonda (Angela Bassett) ascends to power. Wakanda is the only known source of the highly prized mineral ‘vibranium’, which is used in weapons of mass destruction. As such, Wakanda is the most powerful nation on Earth. Members of the UN try to persuade the Queen to share the precious mineral but she refuses. This makes Wakanda an enemy of other powerful nations such as the US. However, a new threat comes from an underwater colony, Talokan, and its leader, Namor (Tamech Huerta). The Talokanil are mutant descendants of the Yucatan Peninsula Mexicans, who live and breathe underwater and who also have access to vibranium. Namor is the only Talokanil who can breathe above water, and he also has winged feet and other super powers. Namor intends to rule the world with his powers and wants Wakanda to join him. Queen Ramonda has no intention of joining in a war against the ‘surface people’.

Princess Shuri (Letitia Wright), the king’s sister, is highly intelligent and uses her advanced knowledge of technology to help develop weapons in the defence of Wakanda. Together with the head of the Army, Okoya (Danai Gurira), they travel to the US to find a scientist who has created a machine that detects vibranium. The scientist, however, turns out to be a 19-year-old university student, Riri (Dominque Thorne), who is wanted by Namor. As the threats to Wakanda grow, the need for a new ‘Black Panther’ becomes pressing. It is now up to Shuri to take on the role occupied by her beloved older brother and to defend her nation of Wakanda.

There is a lot of stylised violence in this movie, including fighting with swords and weapons, automatic rifles, characters being thrown, plane and vehicle crashes, but no blood and gore. Some examples include:

Black Panther: Wakanda Forever is a sequel to Marvel’s original Black Panther movie. In 3D, it is visually stunning with diverse landscapes and characters. At 161 minutes, the film is dragged out and overly long and the plot is rather clichéd and trite, however, it is likely to appeal to teens and Marvel fans. Due to the violence and scary scenes, this film is not suitable for children under 12 and parental guidance is recommended for children aged 12-14.

The main messages from this movie are that vengeance should not consume you; and that those with power should use it wisely.