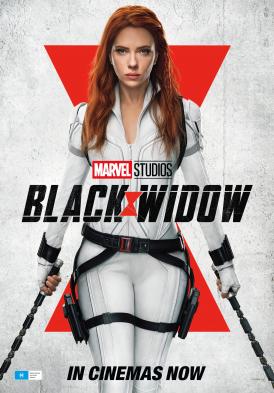 Aside from a quick glimpse of what life was like for the young Natasha and Yelena in mid-1990’s Ohio, Black Widow picks up shortly after the film Captain America: Civil War left off. Natasha (Scarlett Johansen) is on the run from the US government and is hiding out in Norway when she encounters a robotic soldier intent on stealing an antidote for chemical subjugation. The villainous Dreykov (Ray Winstone) is using this tool to disable free will and keep an army of ‘black widows’ under his personal control. Under the impression that Dreykov had been killed, Natasha heads to Budapest where she encounters her estranged sister, Yelena (Florence Pugh), who was trained as an assassin and has just escaped from Dreykov's black widow army. Together the sisters decide to track down the infamous Red Room; stop Dreykov; and free the women held under his control. Seemingly, Dreykov doesn’t exist, nor does his Red Room, so the pair set off to find their ‘father’, Alexei (David Harbour), the only person they know who might be able to track Dreykov down. After freeing him in a daring prison break, they find themselves on their way to a pig farm where their ‘mother’, Melina (Rachel Weisz) (whom they believed to be dead), is running chemical tests and finding ways to control every action in an effort to further assist Dreykov with his evil plans. Battling the trauma of their younger years, the sisters try to come to terms with their past and with each other, wondering what was real and what was not, wondering if they can trust those they once called their parents, and wondering if they have the strength to do what must be done – to look within themselves, atone for past mistakes and, ultimately, save the world.

Black Widow is an action, adventure film and the latest in the Marvel franchise. Focussing on sisterly love and featuring numerous female roles it is expertly cast and contains numerous big budget scenes and special effects. However, when referring to females, Dreykov claims he can ‘start and end wars using the only natural resource the world has too much of’. Despite the strength displayed by the largely female cast this is a dangerous message to be imparting to young people. Due to content such as this, as well as the frequent violence and scary scenes, Black Widow is not a family film but one that will be best enjoyed by older teens and mature audiences.

The main messages from this movie are that families come in all forms; that some bonds are unbreakable; and that, no matter what happens, you should never let anyone destroy your heart.