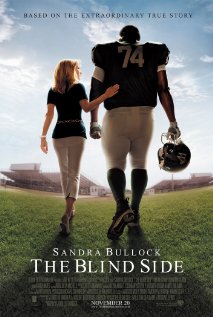 This is the true story of Michael Oher (Quinton Aaron), a disadvantaged African American youth, who went on to become an American football player for the NFL. Michael is taken from his mother at a young age because of her drug addiction and grows up in a very tough neighbourhood in Memphis. His life changes dramatically when he unexpectedly meets Leigh Anne Touhy (Sandra Bullock), a strong yet kind-hearted woman who takes Michael into her home. The Touhy’s wealthy lifestyle couldn’t be further from the life Michael has known. Sean Touhy (Tim McGraw) owns a chain of fast food outlets and they live in a beautiful house. The two children Collins (Lily Collins) and precocious S.J. (Jae Head) accept Michael and he becomes one of the family.

Michael struggles at school and initially on the football field, much to the dismay of Coach Burt Cotton (Ray McKinnon) who had seen Michael’s size as being a great advantage. However, with coaching from Leigh and tutoring from Mrs. Smith (Kathy Bates), Michael goes on to succeed in both, winning a college scholarship.

Children in this age group could be disturbed by the threatening and violent behaviour of the men from Michael’s neighbourhood.

The Blind Side is an inspirational true story of a kind-hearted woman who reached out to someone in need and helped him to succeed in life. Sandra Bullock plays the part of Leigh Anne Touhy very convincingly but the movie does seem to gloss over the many difficulties that must have arisen.

The main messages from this movie are that compassion and kindness can really make a difference.