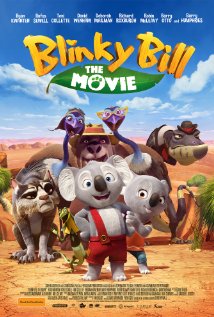 Bill Koala (voice of Richard Roxburgh) is the greatest explorer in the Australian outback but when he goes missing his son Blinky Bill (voice of Ryan Kwanten) decides to brave the dangerous unknown and to search for  his father. On the journey Blinky meets a zoo koala named Nutsy (voice of Robin McLeavy) and a frill neck lizard named Jacko (voice of David Wenham). Together, the three of them must face the scary ‘Croc Canyon’ if they want to find Blinky’s father and return home.

Death of a parent; separation from a parent; children as victims

Jacko flirts with one of the emus

There is some mild coarse language that children may imitate in this movie, including:

Blinky Bill the movie is an enjoyable adventure film filled with Australian slang and Australian animals. Parents should be aware that it was originally classified PG and reclassified G by the Classification Review Board after an appeal by the distributor.

The main message from this movie is that “an adventurer never gives up, always helps those in need and always keeps his promises.”

This movie could also give parents the opportunity to discuss with their children the pros and cons of keeping animals in zoos and wildlife centres.