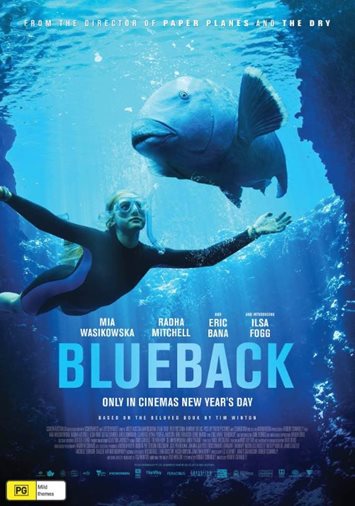 Not recommended under 8; parental guidance to 9 (themes, lack of interest for younger viewers)

Abby Jackson (Mia Wasikowska), a marine biologist, receives a call telling her that her mother has had a stroke and she needs to go home. Abby returns to Longboat Bay, which brings back memories of growing up there with her mum, Dora (Radha Mitchell). As a young child, Abby (Ariel Donoghue) was introduced to deep sea diving by Dora, a passionate activist and defender of the ocean and all its creatures. Abby befriends a blue groper, which she names ‘Blueback’, who is playful and friendly. Gropers live in the same area for 70 years, so each time Abby and Dora dive they meet their friend.

Later, as a 15-year-old, Abby (Ilsa Fogg) joins her mother in protesting against the development of Longboat Bay and the dredging of the waters to allow for larger boats to visit. Abby introduces her friend, Briggs (Pedrea Jackson), an indigenous Australian, to Blueback. Briggs is also passionate about saving the ocean creatures. When divers arrive with spear guns, Abby has to protect Blueback and is nearly shot herself in the process. Her heroic stand, however, ultimately saves the Bay.

Blueback is an adventure movie based on the popular book by Tim Winton. The cinematography and underwater cinematography are stunning along the Western Australian Coast. The movie’s message is about protecting our environment and coastal reefs and while there is little in the movie that is scary, there are a couple of violent scenes and a couple of characters die in the course of the film. It is therefore not recommended for children under 8 and it is better suited for families with older children.

The main messages from this movie are that we are custodians of our land and environment and, as such, we must look after it; and to stand up for what you believe in.