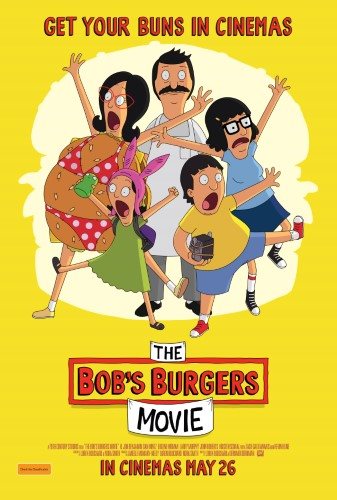 Bob (voice of H. Jon Benjamin) had a dream of opening up a wonderful burger place where people would flock for a taste of his incredible and unusual burger combinations. He and his wife, Linda (voice of John Roberts), made the dream a reality but when they begin to have trouble making payments to the bank and are denied an extension on their loan, Bob is faced with the loss of his dreams and wonders how things could possibly get any worse. Despite Linda’s perky hopefulness, Bob doesn’t have to wait very long. When a giant sinkhole opens up right in front of their shop, customers are unable to get in and Bob and Linda are unable to sell any burgers. The couple are told that it won’t be long before the hole is filled in but when their youngest daughter, Louise (voice of Kristen Schaal), accidentally falls in and discovers a body, the sinkhole turns into a crime scene and it looks like the bank will foreclose before customers will be able to get back into their shop. When their landlord, Calvin Fischoeder (voice of Kevin Kline), is charged with the murder, Louise, along with her sister Tina (voice of Dan Mintz) and brother Gene (voice of Eugene Mirman), set off to save their dad’s dream; to prove that Calvin is innocent; and bring the real murderer to justice.

The Bob’s Burgers Movie is an animated adventure based on the TV series, Bob’s Burgers. The film contains an action-packed plot, full of twists and turns but, due to the content, it is not a family film. Instead it is better suited to older tween, teen and mature audiences.

The main messages from this movie are to believe in your dreams, be true to yourself and to never give up.