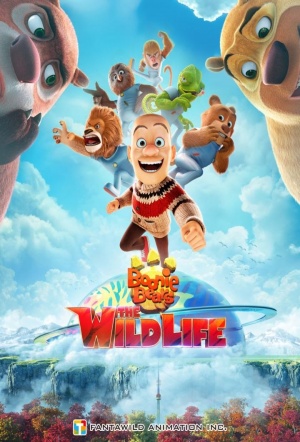 Not suitable under 8; parental guidance to 12 (violence, scary scenes, themes). In Mandarin language with English subtitles.

Vick, a down on his luck tour operator, is overjoyed when he hears about a fun park called ‘Wild Life’ and the special, super-transforming, challenge that will allow one lucky champion to win a million dollars. A former classmate tells him all about how you get to wear a suit and transform into the animal of your choice – you and your teammates work together to get through the elimination round and make it to the final challenge. Believing that money will finally solve his problems and make him happy, Vick and his friend meet at Wild Life but when Vick’s friend leaves him for a better group he quickly puts together a rag tag team of his own with his bear friend, Bramble (a real bear and true friend), who has followed him to Wild Life, along with a mysterious stranger named Leon (voice of Chris Boike). What Vick doesn’t know is that Wild Life was Leon’s idea and that he invented much of the technology used to create the transformations. Furthermore, Leon wasn’t there to win the competition, he was there to shut the whole place down as the tech they were using wasn’t safe and would create permanent, aggressive transformations once the final round was complete. While Leon’s former partner and the current face of Wild Life, Tom, tried to keep the contest on tract and adamantly argued that the tech was safe, Leon’s only thoughts were of his deceased daughter Lily, how his invention had made her happy, and how, in her honour, he wanted to help others find the same happiness and not do anything that would harm or hurt them. Meanwhile, behind the scenes, Leon’s artificial intelligence is manipulating the show, deceiving the people and ultimately attempting to destroy them all.

Loss of a child; The dangers of trusting artificial intelligence; Fulfilment at any cost; The notion that having money and the lack of human responsibilities will buy or bring happiness.

Boonie Bears: The Wild Life is an action packed, animated, adventure. The Chinese film features English subtitles and a fairly predictable plotline. It is best suited to native speakers or older children who can read fast. Not suitable for children under 8 and parental guidance to 12 due to frequent, animated violence without consequence or repercussion and some deeper themes that could warrant good discussion.

The main messages from this movie are that true happiness lies within the reach of each and every person – It is not something that can be bought but is rather really simple and something individual that is found within us all.