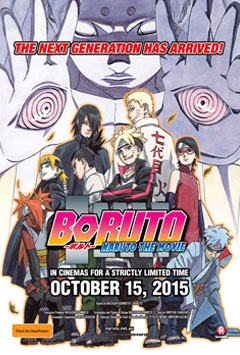 Boruto: Naruto the Movie is the eleventh animated ‘Naruto’ film, based on the manga by Masashi Kishimoto. The film (which is in Japanese with English subtitles) follows Naruto Uzamaki, the 7th Hokage of Konohagakure. Naruto’s young son, Boruto, is set to enter the Chunin exams and train as a shinobi alongside other talented entrants.

The movie details the quests and battles of the exams – Boruto and his team excel during the initial stages. However, when Boruto defeats a particularly challenging opponent with a clone jutsu, his father Naruto realises that Boruto has engaged in underhanded tactics in an effort to win. Disappointed, Naruto disqualifies his son.

Boruto has hated his father for most of his life, as a result of Naruto’s absences and lack of parental compassion. Upon being disqualified, Boruto finally lashes out verbally at his father. Soon after his outburst, two attackers appear and attempt to kidnap Naruto. Although it appears that Naruto dies during the battle, Boruto holds out hope that he is still alive and works to find him.

Ninjas; relationships and parenting; loyalty and trust; honour and sacrifice

There are many scenes of violence throughout the film, including extended battles. There are explosions and magic and use of weaponry such as swords and axes. The characters can manipulate elements such as fire, lightning and water in order to defeat their opponents. Examples include:

The frequent violence, which includes magic and transformations, is likely to be very scary for this age group. There are also many scenes of characters in peril, including:

Naruto’s apparent sacrifice of his own life to save Boruto and Sasuke is likely to disturb this age group – however, Boruto does not believe that his father is truly dead.

Younger children in this age group may also be disturbed by some of the violent and disturbing scenes described above.

Boruto: Naruto the Movie is an action-packed animated story about family, honour and sacrifice. The film explores the complex nature of relationships, and provides an in-depth commentary on the necessity of finding balance. Naruto is frequently unavailable to his son Boruto as a result of his work obligations, and it causes intense friction and distance in their relationship. However, whilst the film implies that Naruto must re-address his central priorities, it also highlights the need for Boruto to be more understanding towards his father.

The film presents a realistic impression of battle (despite the supernatural and magical elements involved). It also explores the courage it takes to overcome both physical and mental obstacles when engaged in battle. The film’s themes and the many scenes of violence make it unsuitable for children under 14 with parental guidance recommended for slightly older teens.