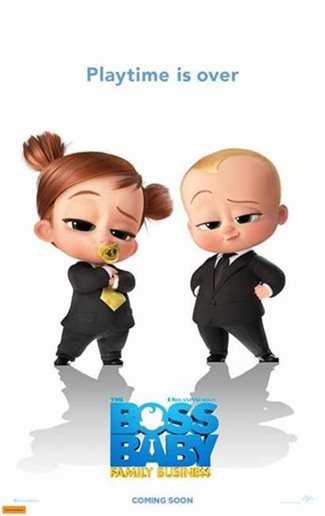 Not suitable under 5; parental guidance to 7 (high level of visual and auditory stimulation, mild peril, scary themes and scenes, violence)

Many years after 7 year-old Tim discovered that his baby brother, Ted, was a special agent for secret organisation Baby Corp., the Templeton brothers have grown up but also grown apart. Ted (Alec Baldwin) is now a successful and extremely busy CEO, while Tim (James Marsden) is a married, stay-at-home Dad. Tim is worried about his 8 year-old daughter, Tabitha (Ariana Greenblatt), who he has lately been struggling to connect with and who he thinks is so ambitious about excelling at school that she forgets to be a child. As if this wasn’t enough, one night Tim discovers that his baby, Tina (Amy Sedaris), is in fact a ‘Boss Baby’ working for Baby Corp.! Tina has the assignment to get intel about Dr Armstrong (Jeff Goldblum) – the founder of a global network of schools – because they suspect that he has evil plans. And who could be better suited to join the mission than the former dream team, Tim and Ted? Thanks to a magic formula, Tim and Ted are transformed back to their young selves which allows them to infiltrate Dr Armstrong’s school, which also happens to be the school Tabitha has just started attending. Will Tina, Tim and Ted get behind Dr Armstrong’s sinister plans; will Tim and Ted be able to rekindle their brotherly bond; and will Tabitha allow herself to take her time growing up?

The Boss Baby – Family Business is the sequel to 2017’s The Boss Baby, inspired by Marla Frazee's children’s books. Apart from providing entertainment, this movie includes positive messages and role models. The movie points out the importance of families sticking together; of parents making an effort to bond with their children; and that having boundaries is just as important as having freedom. The movie’s level of stimulation, scary themes, peril, and mild violence make it unsuitable for children under 5 and warrants parental guidance for children under 8.

The main messages from this movie are that there is nothing like the family bond; and that childhood is a precious time.

This movie could also give parents the opportunity to discuss with their children the importance of openness and tolerance toward modern family models, including stay-at-home dads, and women as sole bread winners.