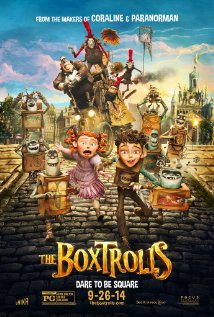 Not recommended for under 6; parental guidance 6 to 9 due to scary and violent scenes

Boxtrolls is a quirky stop motion animation film from the creators of Coraline and ParaNorman. It is based on the children’s novel Here Be Monsters by Alan Snow.

Eggs (voiced by Isaac Hempsead Wright) is an orphan who is raised by Boxtrolls. Boxtrolls are little friendly trolls who live underground and who collect and reuse trash for their inventions. However, the town’s people believe that Boxtrolls are scary monsters who steal their children and their precious cheese.

When Archibald Snatcher (Ben Kingsley) is promised a leadership role in the town if he eliminates all the Boxtrolls, Eggs must venture above ground to save them. Eggs meets a girl name Winnie (Elle Fanning) and together they must try to stop the evil exterminators, save the Boxtrolls and convince the town that the trolls are actually good.

Kidnapping; separation from parents; children as victims; death of a parent

There are some mild insults, including:

The Boxtrolls is a quirky and spooky animated film about the problems of wanting to fit in and to be something that you are not. It is ideal for children over the age of 9. Because of the themes and the scary elements of this film, parental guidance is recommended for younger children.

This movie could also give parents the opportunity to discuss with their children the real-life consequences of passing on, and believing in, rumours.