Boy and the Beast, The 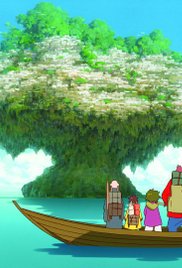 The Boy and the Beast is an animated Japanese film which is being screened in both sub-titled and dubbed versions. It tells the story of a lonely 9-year-old orphan boy named Ren (voiced by Aoi Miyazaki) who prefers to wander the dangerous streets of Tokyo than live with the relatives who are his legal guardians. While walking the streets alone one night, Ren discovers the entrance to an alternate universe named Jutengai which contains many beast-like creatures. Among these beasts is a warrior bear named Kumatetsu (Koji Yakusho).

Ren admires the fighting skills he sees Kumatetsu display, and asks to learn from the warrior. Kumatetsu proceeds to take Ren under his wing as an apprentice, despite the fact that their personalities clash heavily and much of their time together is spent arguing over small issues. Eventually, the two establish a harmonious relationship and live together for many years.

At the age of 17, Ren ‘Kyuta’ (now voiced by Shota Sometani) begins to feel drawn to the human universe once more. He begins to visit sporadically, but eventually meets a kind-hearted girl called Kaede with whom he enjoys spending time. Torn between his potential relationship with Kaede and his friendship with Kumatetsu and life as a warrior, Ren must decide between living as a human or as a beast.

The supernatural; good versus evil; being an orphan; relationships

Children in this age group may be disturbed by some of the above-mentioned scenes and by the following:

The Boy and the Beast is a touching story about a young boy’s journey into adulthood, and the process by which he learns about relationships, responsibility, and morality. Ren transforms from a lonely and angry child into a young man who cares deeply for others, and is willing to make sacrifices in order to help them.

Messages from this movie that parents may wish to discuss with their children include: