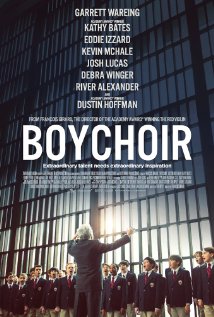 Not recommended under 12, parental guidance recommended 12- 14 due to disturbing themes and scenes. Lacks interest for younger children.

Stet Tate (Garrett Wareing) is an 11 year old boy living with his troubled single mother Debbie (Erica Piccininni). Stet finds himself alone when his mother is killed in a car crash and he then meets his father (Josh Lucas) for the first time. His father has another family who know nothing of Stet, and he doesn’t want them to find out, so Stet is sent to board at the American Boy Choir School, the top choir school in the country.

Stet has a gift for singing but he finds it very hard to conform to the rigours of boarding school. The choirmaster, Mr Carvelle (Dustin Hoffman) recognises both the talent and the conflict in Stet, and pushes him hard to achieve his potential. Meanwhile Stet has to contend with bullying from his roommate Raffi (River Alexander) and the jealousy of top boy Devon (Joe West).

Single parenting; alcohol abuse; death of a parent; abandonment by a parent; bullying

In addition to the above-mentioned violent scenes , there are some scenes in this movie that could scare or disturb children aged five to eight, including the following:

Children in this age group could also be disturbed by the above mentioned scenes and the following:

Boychoir is a drama about young boys at a boarding school whose main focus is choir singing. Lovers of classical choir music will enjoy this movie and there are some great performances from Dustin Hoffman and Kathy Bates as the school principal. The film is not recommended for children under 12 and parental guidance is recommended for the 12 to 14 age group. Stet’s family situation, with a father who doesn’t want to know about him and an alcoholic mother, and the bullying at the school, result in some intense scenes which may disturb primary school children and young teens, particularly those who identify with Stet’s situation. The film is likely to lack interest for very young viewers.

Parents may also wish to discuss the following issues: