Boys in the Trees 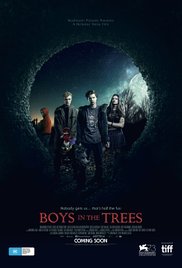 Not recommended under 15 due to disturbing scenes and themes, violence, coarse language and drug use.

It's Halloween1997 in suburban Australia. Corey (Toby Wallace) and his skater friends have just finished their final day of high school ever, and are going to celebrate with a wild night full of booze, drugs and mischief. Corey is not so sure he likes the plans that his friends have for the evening and decides to take a walk on his own.

He finds himself back at the skate park in the company of an old childhood friend that he grew up with. The two boys have grown apart through the years and now Corey is part of the popular gang whilst his old friend Jonah (Gulliver McGrath) is the school outcast. The two boys revisit their friendship and play a familiar game of dare that takes them into some dark and spooky places full of ghosts and demons.

The night is a surreal journey between past and present and it becomes clear that there is a shared trauma in their past. Corey must find a way to put his guilt to rest and move on.

There are many scenes of violence in this movie including:

There are many instances of substance use in this movie, including:

There is a lot of coarse language used aggressively in this movie, including:

Boys in the Trees is a dark and slightly convoluted film that explores what it is like to be a boy on the cusp of manhood. It ambitiously tackles sticky issues of masculine friendships, male affection and aggression, childhood trauma, self-harm and suicide. This is an emotional and sometimes quite disturbing film which is not recommended for viewers under 15. There are many scary scenes, confronting themes and rather strong coarse language. Parents of older teens may wish to discuss some of the themes, including suicide and rape, with their children.