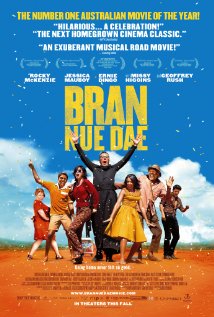 Not recommended under 8, PG to 13 (Violence, Sex, Coarse language)

Bran Nue Dae is set in Broome in the late 1960s.  It tells the story of Willie (Rocky McKenzie), a young man on the cusp of adulthood, who spends his days happily fishing and hanging out with his friends and his girl, Rosie (Jessica Mauboy).  Willie’s mother Theresa (Ningali Lawford-Wolf) has other ideas about Willie’s future and is eager for Willie to pursue a religious path. She sends him back to spend another year of schooling on a religious mission in Perth.  Willie is a prefect at the mission and has been taken under the wing of Father Benedictus (Geoffrey Rush). However, a rebellious act to protect his friends puts him in the bad books and he is punished by Father Benedictus.  Willie runs away from the orphanage in a determined bid to make his way back home to Broome and his girl, Rosie.

On Willie’s trip home he meets Uncle Tadpole (Ernie Dingo) who knows Willie’s mother.  Willie manages to convince Uncle Tadpole to help him get home to Broome, and Uncle Tadpole manages to convince a couple of unsuspecting hippies, Annie (Missy Higgins) and Slippery (Tom Budge) to take them ‘just’ up the road to Broome.  What follows is a hilarious 2500 km journey through the beautiful landscape of Western Australia with colourful characters played by Deborah Mailman and Magda Szubanski adding to the chaos.

Children in this age group may also be upset by scenes of children in distress in the mission.

Bran Nue Dae is a joyful musical comedy about a young man’s journey home and his coming-of-age.

The main message from this movie is that home is where the heart is.

Values in this movie that parents may wish to reinforce with their children include: friendship, determination and looking out for one another.