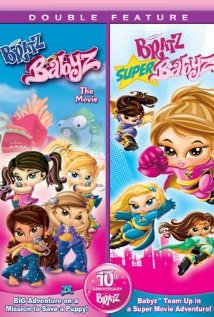 Lacks interest under 5, PG to 10 due to themes and sexualised images

This is the story of four girls whose friendship started in kindergarten. Sasha (Logan Brown), Jade (Janel Parrish), Yasmin (Nathalia Ramos) and Cloe (Skyler Shae) come from very different backgrounds and have different interests, but feel their friendship is very important and are very loyal towards one another. As the film opens they are about to start high school together at Carry Nation High and are excited by the prospect.
The four friends soon find their friendship severely tested. The powerful school president and daughter of the principal, Meredith Dimly (Chelsea Staub) is determined to have complete control of the whole school and therefore when students turn up on the first day she directs them to an area where there are students with similar interests. This way the students are split into cliques and, by not mixing with each other, leave Meredith and her friends to run the school.
Each of the four friends has different skills and interests. By joining the various groups that allow them to follow through with these interests they find that they are unable to spend time with each other and two years later they hardly talk.
One day they end up in detention together and realise that they have been coerced into behaving in a way that is detrimental to what was once very important to them - their friendship. They form a plan to not only spend time together but to get cliques to get to know each other as well. In doing this they make an enemy of Meredith and need to work hard to be together and follow their dreams.

There is some mild coarse language and putdowns, including:

Bratz: The Movie is a teenage comedy based on characters from Bratz dolls and cartoons. The main focus of this movie is friendship. Values which parents may wish to reinforce include

Parents may also wish to discuss the negative consequences of cliques, peer pressure, selfishness and the need to control others.