Break the Silence: The Movie 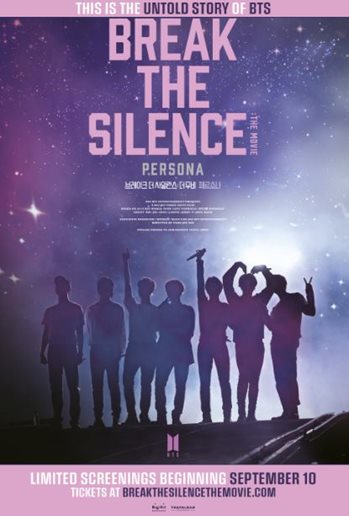 Parental guidance to 12 (mild themes and possible lack of interest)

In this documentary-style film, viewers get a behind-the-scenes look at the young men who make up the hugely popular Korean boy band 'BTS'. Band members :RM; Jin; Suga; J-Hope; Jimin; V; and Jungkook all talk candidly about what it is like to tour the world and the impact that their journey has had on each of them as individuals. Audiences are shown parts of the Love Yourself World Tour that took the world by storm, and members of the group reflect on their devotion to their fans, their dedication to their craft and the toll this has taken on them personally. They discuss what they have lost and what they have gained and how, despite all the ups and downs, they have grown and evolved into a phenomenon that none of them expected and how they hope to use their talents to inspire others and bring comforting messages to the world.

The price of fame; Vanity; Loneliness; The wearing of masks and hiding who you truly are.

There was no violence noted in this movie.

Break the Silence: The Movie is a documentary-style film featuring interview clips, parts of concert performances and a candid behind-the-scenes look at what life is like for the performers of 'BTS'. The film is subtitled, as much of the conversation is in Korean, and is thus best suited to older audiences and fans of the famous K-Pop group.

The main messages from this movie are to love yourself, to find out what makes you happy and to follow your heart. The boys are living their dream and are hoping to inspire others to do so as well.