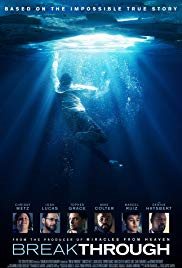 Not recommended under 10, Parental guidance to 13 (adult themes).

Based on true events, Breakthrough follows an episode in the life of 14-year-old John Smith (Marcel Ruiz), the adopted son of a devout Christian couple Joyce and Brian Smith (Chrissy Metz and Josh Lucas) who falls through thin ice while playing with friends out on a lake. Despite the fact that he is under water for over 15 minutes and is unresponsive for 45 minutes before being pronounced dead at the hospital, John’s mother prays a heartfelt and emotional prayer over her son’s lifeless body begging God to breathe life back into her child. Almost as soon as these words are uttered John’s heart begins to beat again. It is weak and he is not expected to survive but time and again John defies the odds. With Pastor Jason (Topher Grace) there for emotional support and under the watchful care of Dr Garrett (Dennis Haysbert) the parents find the strength to endure criticism, the hopelessness of others and the heartbreak of what is happening to their child. Joyce believes that God will save her son. Despite all the evidence indicating that to be medically impossible she has absolute faith that he will be healed and as their community comes together to pray, countless hearts around the nation are touched and lives are forever changed by the miracle that only one woman saw coming.

Christian faith; adoption, serious accident with the possibility of death, and fervent faith in God in the face of impossible odds.

Breakthrough is an emotional drama based on the miraculous, true, story of John Smith. All the actors give excellent performances and while the film contains numerous powerful and positive messages it is best suited to older children and mature audiences. Parents should be aware that this film contains strong Christian messages and themes.

The main messages from this movie are that we all have a purpose in life, the value of trusting in a higher power, to love unconditionally, and realise that “yesterday is not ours to recover but tomorrow is ours to win or loose.”