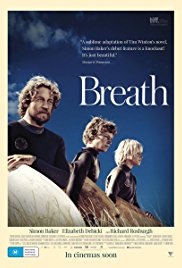 Not recommended under 15 due to strong adult themes, coercive sex scenes, illicit substance use and coarse language.

Breath is an adaptation of Australian author Tim Winton’s novel of the same name. It is a nostalgic coming-of-age film set in Australia in the late 1970s. Bruce ‘Pikelet’ Pike (Samson Coulter) is nearly fourteen when he and his best mate Ivan ‘Loonie’ Loon (Ben Spence) are seduced by the promising adventure, risk and mystique of surfing. Against a stunning backdrop of the Western Australian coast line, the two young boys dip their toes into surf culture, scrimping and saving for their first boards, hitching rides on the back of utes to catch waves and teaching themselves to ride a board.

One day, a seasoned surf pro, ‘Sando’ (Simon Baker) offers them a lift back from the beach telling the boys that they can leave their boards at his property to save them the effort of carrying them on their bikes. The relationship between Sando, the two boys and Sando’s American wife Eva (Elizabeth Debicki), deepens over time and Sando fosters the boys’ love of surfing and encourages them to take more and more precarious risks. Pikelet narrates the story, and through his eyes we see the complexity of handling life, dealing with fear, and navigating adult relationships and responsibility.

As above, children of this age are likely to find the sex scenes between an adult woman and a young boy very confusing, and the complexity of the relationship would be difficult to explain to this age group.

Younger teens may also find the scenes mentioned above disturbing or confusing.

Breath is a very poignant and poetic portrayal of boyhood crossing into manhood. It is also a great surf film. The incredibly beautiful cinematic shots of the ocean and the swelling waves are an allegory for the inevitable, terrifying leap into adulthood. The film deals subtly with themes of masculinity, risk and fear. Young men, in particular, may find this film empowering. Although the film at times feels targeted towards younger teens, the abusive sexual relationship between Eva and Pikelet, and the consequences that arise, may be too confronting for, or possibly misunderstood by, less mature teenagers. Parents are advised to think carefully about the suitability of this content before allowing their children to see the film.

The main message from this movie is that saying ‘no’ to situations that are too risky, unsafe or uncomfortable does not make you a lesser, weaker ‘man’ or person. You can learn to overcome your fears and take risks, but there is also strength in learning when to say no.